Since George turned one, it feels like it has been another whole year with the amount of change that has happened with my wee man!  The change from that big baby to toddler is so dramatic and it has been quite an emotional shift for me as a mum. That baby you want to hold onto forever just wants to go, and go very fast at that! 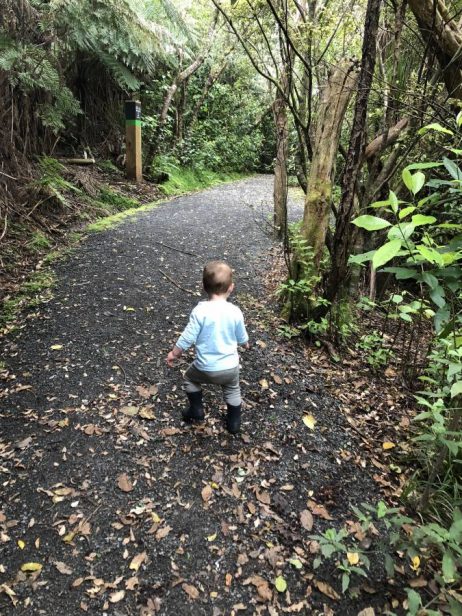 George started walking at 13 ½ months and instead of easing into it slowly, he went from nothing to running in a couple of weeks! Now, 2 months later I am battling his determined nature and his desire to run down hills (Arrh) and go frontwards down the stairs.

Alongside this incredible physical shift there is his cognitive and verbal development, his ability to follow instruction and copy words that I use repeatedly to help him to communicate.  The “err” or some may say ‘whingeing’ sound that was coming out of his mouth as his way of asking for something, has started to diminish with my persistent and repetitive encouragement of words that I know he has the ability to use. From only a few words, in the past month we are up to words like – up, down, more, help, mama, nana, poppa, yes, ta or sometimes a sort of “peese” and basically if given the opportunity a new word daily or weekly based on what mood he is in and what we are doing!

He has started having little ‘Tanty’s’ as I like to call them, laying himself down on the ground when he can not do something, especially when coming inside from outdoors!  I just explain to him that I know he doesn’t like it and then distract him or if needed give him some love and a hug to help him through his frustration.

His love of music and movement just keeps on excelling and for those who follow me on Facebook; you would have seen his love of music with my video of playing on our friend’s piano.  He is lucky enough to go to Home-based care with a wonderful woman who plays the ukulele and the other day I arrived to a heart warming scene, Jane sitting on the deck playing a wonderful version of ‘twinkle twinkle’ with George doing a sole dance, hands in the air and turning around!

He is going through the very usual attachment phase too, wanting to know where ‘Mama’ is when I am away for work, unlike in the past where it was ‘out of sight, out of mind’. It is so lovely when they love you so much but there are times when you are trying to get things done or when leaving him with his Nana or his caregiver that it can pull those heartstrings. 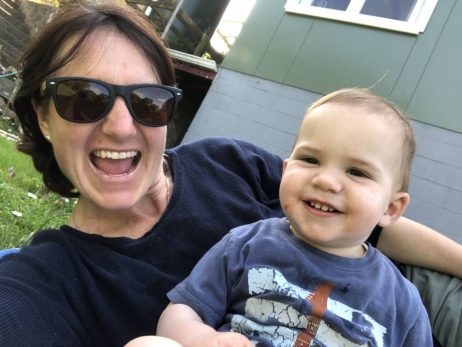 Once again he being challenged by teething, this time he is cutting his molars and eyeteeth at the same time. His skin flaring up on and off along with his dislike for some vegetables which taste different now this is happening. Our long, distraction filled meal times are back, my ‘tool box’ of useful songs, books or items are ready so that I can help him to get as much in his mouth as possible. I know with many children that the grizzly teething behaviour is often also their hunger but being ‘off’ certain foods or textures, it takes patience and persistence to help them to eat again as they just are too young to understand that that is why they are grizzly!  I also noticed that with the discomfort of the teething moving up almost ready to cut, he desire for more breast milk was increasing, the comfort.

Having not ever decided how long I was going to breast feed for and really just going with each week and what it brought to me, I started to see (as I have seen with many clients around the 15-16 month age bracket) that his once wonderful nights were soon showing signs of regression.  This made me run through my mental check list – what is happening with his day routine, how much food is he eating and how much milk is he having in the day and how much exercise am I giving him post his big midday sleep?  Once I was sure this was all on track I knew that the night waking was really mostly down to comfort feeding and it was my nudge to start weaning him.  As I have mentioned many times before, it is tiring enough being a solo working mother and with the night regression for a couple of weeks and more travel with work, plus knowing that at 15 months I had given him a great start to life, it was time for me to look after me so I could be as energized for him and his new busy toddler stage. As I knew it would, after 3 nights of a small bottle at 5am (ish) he then started to sleep through the night, no more boob he thought, then no need to wake!! And so 1 week on, the little champ is sleeping wonderfully again.

I do have to mention though, as I said above, ‘running’ him in the day now that he is sleeping so well both day and night, it key. They need that balance (some more than others) of sleep, food, physical and mental stimulation over their 12-hour day. It is a common ‘tweak’ I talk about with my clients, balancing what happens over their babies or toddlers waking hours, checking in on how much carseat or buggy time in relation to physical and communicative play. It is something that has become more relevant with the change of lifestyle that most lead today. After his big midday sleep we either go to a park with a lot of running space or spend it in the garden where it is a afternoon sun trap and even have had a little hose action! 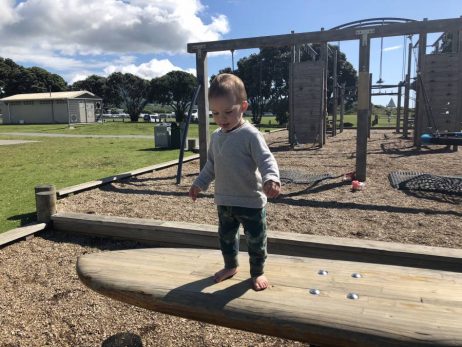 As we are fast approaching the summer holiday season I look forward to George loving time at the beach. At the moment I am avoiding the rock pools and waters edge, much to his frustration, as it is too cold still and I am holding off that runny nose as long as I can! Soon it will be sun suits, west coast black sand poo’s and family fun times.

2019 Greetings and Update
Scroll to top