For so many weeks George has been so vocal, chatting and laughing every time he was awake and playing.  Now that developmental stage has been taken-over by his new skill – Rolling!

I have found him off his mat, stuck up or under the sofa, under the coffee table and very close to a cabinet that is a bit wobbly with things on top – eek.  The other morning I was hanging out washing and could hear this frustrated voice calling out, I came back inside to find him stuck again against the sofa, on his tummy and annoyed he could not keep rolling. 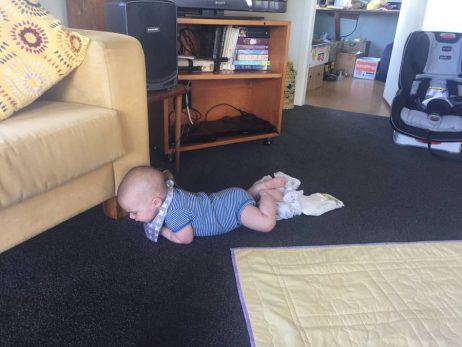 When I came over to my mothers for a few days she told me that I was mobile at 4.5 months, crawling by 5 months and walking by 9 months, so it is no wonder I cannot keep him still!  Interestingly though, being here at mum’s, George is hardly rolling, too much to see (lights on roof and trees out the windows) and just like mentioned above, he is distracted here, not sick of the same view he feels at my house!

It is time now for me to safety proof my lounge, removing the wobbly cabinet and any cables or sharp objects, the rolling baby can cover some ground in no time!

I have had a massive 2 weeks, a trip for work in Auckland, daily phone consults and now preparing my house/property for being rented for a few months.  I started writing the beginning of this blog when I was at mums and since returning from their, my spare time disappeared!

George turns 5 months old tomorrow; he is long, lean and now loving his solids twice a day. His bowel motions have increased which is a good sign, post the sluggish cycle when first starting him on food. I have been very careful what I have fed him, only now, 4 weeks later adding his 5th and 6th new foods – that being purple kumara, apple and courgette. 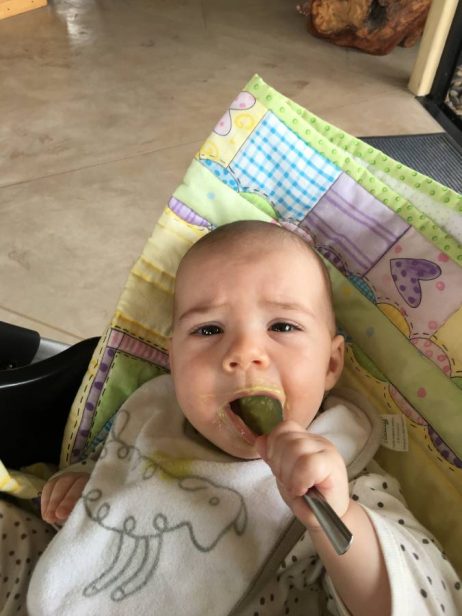 Rolling has been taken over, taken over by pushing his arms up and pulling his knees up and putting his bottom up in the air! George is incredible to watch, he has great concentration and determination and from 1 week mastering rolling, his next stage happened just the next week. While being looked after by my mother, he started pulling up his knees and bottom, then when we got home 2 days later, he was lifting up his torso, arching his back like a seal! 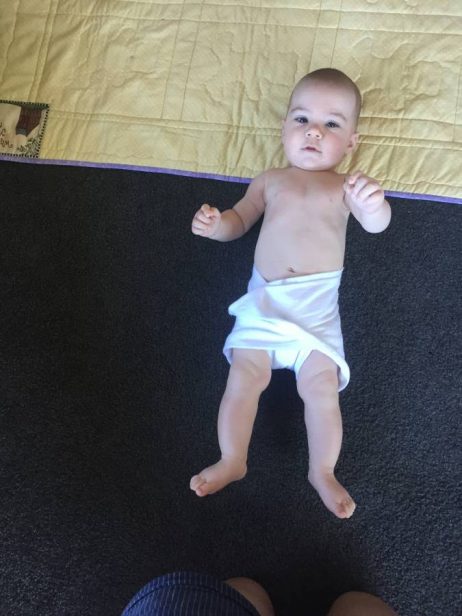 He has however slipped in the grizzly phase of teething and when he is frustrated because his body will not do what his mind wants to! He is happy as Larry being carried around and loves being on the floor for a little time, but really he wants to be on the move.  He loves dancing, being held up and moving his legs to music. Lucky for us, we have a friend with a lot of records and turntables (so did 2 clients I visited last week – I encouraged the new parents to play the music to their new baby, especially when they enjoy watching the record go round and round like G has done for the past month). 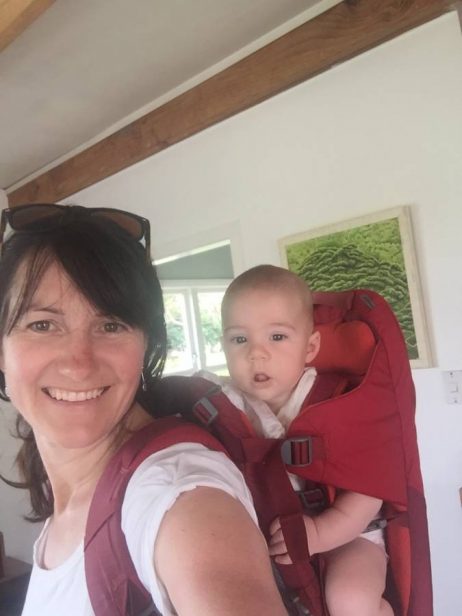 For his sleep, due the heat, I have started to wean him off his loose arm swaddle and out of his wedge for sleeping. His room has been getting up to 29 degrees and I have had to strip him off, have got a pedestal fan blowing over him and have been trialing a sleeping bag by ‘Boy + Girl’, a muslin bag that covers their arms but with slightly more movement than my stage 2, loose arm swaddle option.

Just to top this very busy and hot past month, I have developed DeQuervain’s tenosynovitis, (baby wrist). I have always had weak wrists but this very painful and I have aggravated it by weed eating the garden, water blasting the deck along with lifting a now quite heavy baby! Basically no chance to let it rest and recover!  Those of you who have had it or have it, you will know how tricky it is to find time to ice and rest it, wearing a brace when trying to do things for you baby – and for that matter type!