I can’t quite believe how quickly 4 months has come around. It is the age of a lot of the babies I help parents with, a massive developmental milestone, the end of the newborn and the start of being a really little person, a baby that is communicating and expressing their needs and personality in a much more obvious manner.

George has always been a hands boy, loves sucking his hands and touching different textures but now, as he hits 4 months, the sounds of sucking and intensity have escalated and along with the dribble. It’s becoming quite the slobbery smooch and bibs are a must (thanks to Nature Baby I have just stocked up my supply).

He has progressed to being awake for longer, no longer the 1hr 30min from his 3 month age, he is now doing a pattern of 1h45min, 2hrs and 2hrs30min over the course of the day and even at a push, will last 3hrs if I have had to change his routine due to outings.

The teeth are obviously moving their way up, even though we may see teething symptoms of dribbling, grizzliness and wanting to chew, it can be quite some time before a tooth will appear with some babies and I think George will be one of those, as I cannot see any sign on his gums as yet.  I do not yet have to use my teething gel from Q.baby but it is ready and waiting for when that time comes.

The grizzles are a tricky one, especially for mums like me, parenting alone, as babies often want to be entertained a little more than in the past, a little more time being up and over your shoulder looking at life from a new perspective. It can be so easy to just react to the grizzlies instead of using a little bit of distraction. For me and for George for that matter, ‘wearing him’ or carrying him around in a front pack or wrap is not an option! We are both of the personalities that need space; we both get hot and bothered. I tried a couple of times and he only lasted a very short time, pushing his body and craning his neck to try and see out more, he wanted to be free from the tightness. I have seen this so often over my career, some mums really wanting to ‘wear’ their babies but their baby’s personality rejecting it… Some babies love it and some don’t.

During this stage of development where they want to be carried around a lot, it can soon become a habit, a good habit or for me, not so great habit as I need time to do a few jobs. They can loose interest in as much time on the floor (a touch of boredom for some babies) and like being given a little more attention.

I have always encouraged the term ‘distract before you react’. Of course there are times a reaction is vital but in this situation, when George starts his grizzling, it if isn’t for hunger or a burp, I know it is time for me to distract him, shift his attention to something new – what I talk about often as ‘balance of play’, how you change the activities over their time awake to encourage a balance of both floor play, interaction and tactile/snuggle time.

When I hear G starting to call for me, or start to grizzle my first response is to reassure him that I am near, that I can hear him and that I will be there soon (verbal reassurance), then as I finish folding that bit of washing or finish an email to a client, I will go to him, often taking his nappy off or changing his ‘view’.

Along with finding their hands, teething and more expressive in their needs, the interest in solid food can start now. George has been watching me eat for the past month, but the watching has now become more intense and so I decided to ‘test’ him. I was having avocado on toast this week and as I was eating it, his mouth was open and his look was that of ‘and what about me?’!!!

So I dipped my little finger into the avo and touched his tongue with it. There was no immediate swallowing action but there was not a look of disgust either, just a ‘wow, what is that?’ look. So I know he is not quite ready but I will test him again in a few more days or another week or so to see if he has developed more.

There reason for this ‘testing’ is because when they are showing you signs and there is quite a bit of fist sucking going on, along with some grizzles, often they are trying to communicate with us to say that they ready for a little bit more, particularly when they are long and lean babies, weight gain steady but not as high as it was in the past. I have always promoted ‘listening to your baby’ instead of a set time when it comes to starting solids, every baby is different and some are ready before the recommended 6mths and some are ready after this time, so it is important we watch and ‘test’ our babies to see when they, themselves are ready. 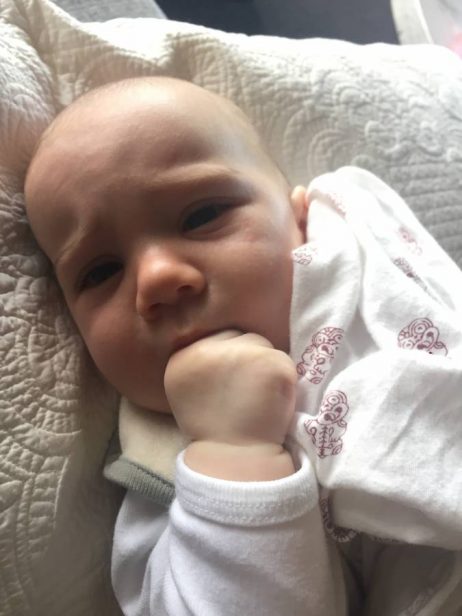 I love the new vocal sounds that are being expressed now and while at Mum’s and baby yoga, the sounds in the room at The Loft – yoga in Raglan are quite hilarious. But each day I say to him, “Slow down George you are growing too fast”, I want to hold onto that baby stage a little longer!