George is 8 months old and an absolute character, so observant, so relaxed in himself and the world (apart from when teething!) and interested in everything one does with their hands! 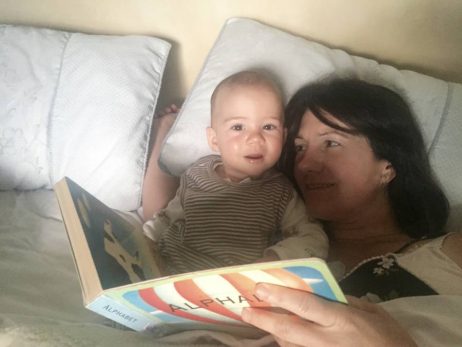 Since I last wrote, he has cut 3 more teeth with another 2 on their way, making that 5 teeth in 2 months! Both his upper and lower central incisors, which came easily for him and his 1st lateral incisor, which unlike the other 4, this tooth has caused G more discomfort.  As I have said to many in my position before, it is better getting them over and done with all in one go, rather than having teething symptoms on and off but nothing to show for it for months. The poor babies and mothers either way really! 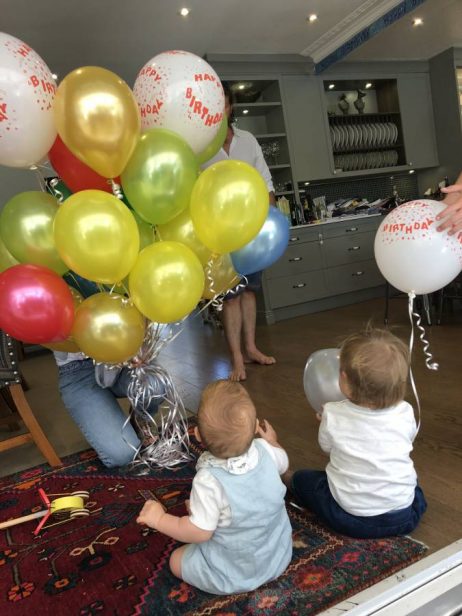 His love for music is growing and I am breaking out more and more old songs from my pre-school teaching days (a helpful distraction with trying to get some food into him) and need to plan getting my piano from our family home so I can play for him. 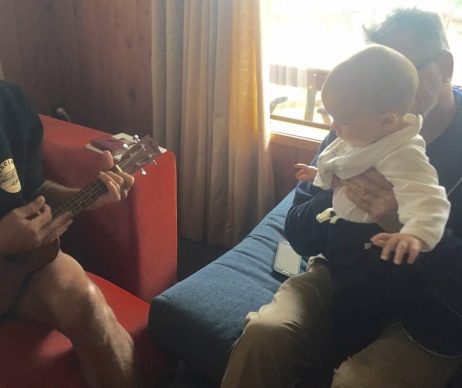 He is showing a great interest in how things work, wheels moving on cars, light switches and remote controls. I think this boy is going to have an engineers mind (it runs in the family) with his 8-month-old interest in fine detail! 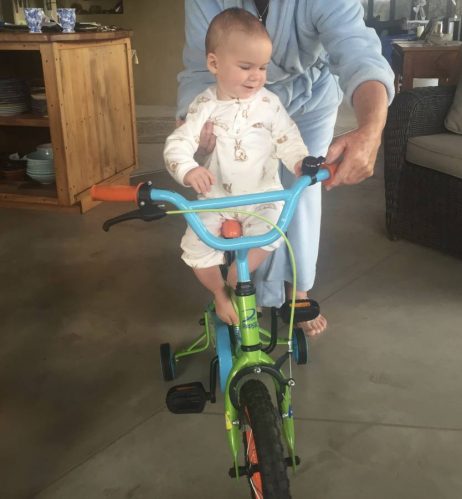 His crawling seems to have gone on a ‘pause’ mode, stopping at his accomplishment of yoga’s ‘down dog’ position. As I have mentioned previously, his larger head and long lean body makes going forward daunting for him, his long skinny arms just not up to taking the weight, alongside his frustrated personality. But he has mastered sitting and being able to reach for his own toys, occasionally making himself fall back at times (lucky for the soft carpet landing) to then be able to roll and reach something he has seen. 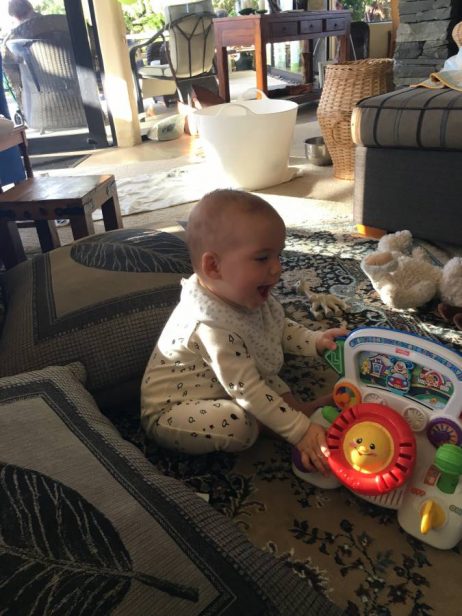 In the last of the warm weather, he loved being able to sit in the shallow water, splashing, reaching for shells and watching the shimmering light on the water. 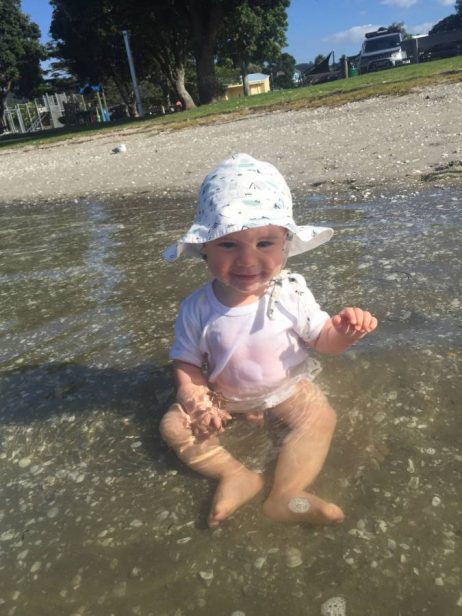 He did have an unlucky experience in the shallow harbour water at Tairua however. The water was so warm and so I just removed his nappy and sat him in the water… soon after I noticed some blood on his t-shirt. My first thought was that he has sat on a sharp shell which has cut him, but then he would have complained about that, and given the amount of blood I soon discovered that he had sea lice stuck to his body in several places, sucking his juicy blood! 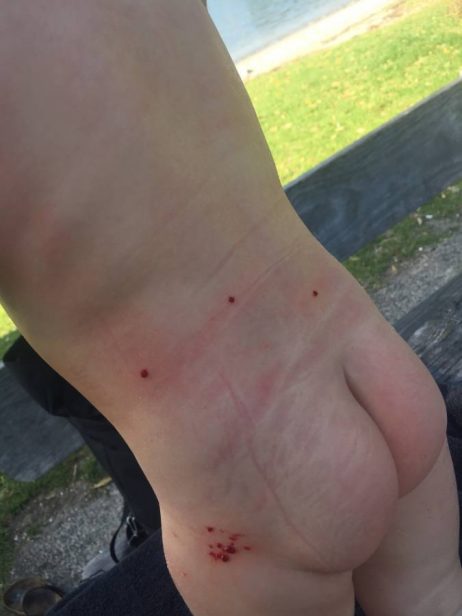 I had to pull them off him! They were not interested in my ankles, just his lower back and bum! But unaware, he was find=e, I did use a little Weleda rash/sting gel from the pharmacy which was open and just 2min walk away!

His latest trick is of pulling this hilarious face is definitely a product of his new teeth… he has two rather large and spaced out front top teeth which makes him look a little like a rabbit, and when wearing his lovely new Nature Baby Rabbit PJ’s, pulling his new face, it does make us all laugh. 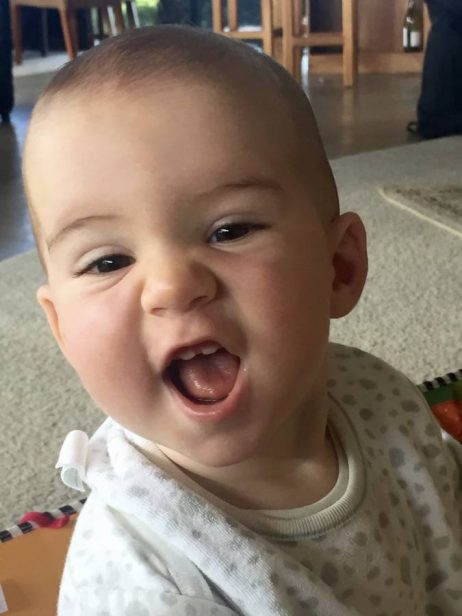 His eating has gone out the window and while going through this next phase, the topic of fussy feeding has been on my mind, fussing feeding and how it can start and how to work through it.  Often babies begin as great feeders, eating most things you offer them and love to try new things but then at some stage while teething, they suddenly go off their food, disliking things they once loved.

This is G right now, he was wonderful at eating, loved most things I gave until about 10 days ago when he started to cut his 5th tooth, one of his lower lateral incisors. He started to turn his head away sharply if offering him food from a spoon or squashing and throwing away the finger food he once devoured.  There are some babies who I would say are ‘foodies’ and some that are ‘grazers’, and the later is definitely George. I know this from the way he breast feeds, never feeding if anything was going on around him from about 6 weeks of age, easily distracted, sacrificing food for entertainment!  So this is fine for a couple of days but soon you may notice a little bit more grizzling, easily mistaken for teething but in fact it is a combination of teething and being hungry, especially long lean babies like George.  Of course what naturally happens to babies like this is they want more milk at night! The classic ‘nocturnal feeder’ soon approaching again and so back to night ‘goal’ feeding, restricting how much he was drinking in the night so that he was still hungry in the day, hungry enough to have a little bit of food.  Just as I was making progress, from our last trip away with work, and his night waking habits, he starts another round of teething and we are back to square one!  Oh the joys!

Over my career I have helped so many mums with children whom are ‘fussy feeders’ and when I ask about how it started, it is either with teething or the babies personality getting bored with sitting for too long, needing to be distracted more.  Most cultures around the world would find it so hard to believe that we often feed our babies and small children independently to the family, separate meal times. Having witnessed both ways and seeing how much better children eat in a group setting with a family mealtime or at daycare.  It is a natural distraction/company/role modeling, encouraging those who need this to have the patience with eating or to regain interest in food post illness or teething, like my wee man.

So when we do not have this opportunity we have to add in other distractions, for example today, I used my reusable food pouch, drove to a playground (being sat morning I knew it would likely have children) and sat him in his buggy where he happily ate because he was interested and distracted in the children playing! The food went down with so much ease, it was a joke!

Tomorrow there is a forecast for rain and so I will plan to eat with him, let him share some of what I am eating (like avocado, baked pumpkin and kumara wedges) and have a few ‘tool’s’ up my belt like a whisk and wooden spoon and even use the buggy as my distractions if needed. This is particularly necessary, as I have started my ‘goal’ feeding at night.

Tonight, day 3 post his last temp of 38 degrees, and with a day of more solid food, we are aiming for a later evening 1st feed! Not 10pm or 11pm which has been his past week since his lack of solid food, tonight my goal is 1-2am, so resettling without a feed if he wakes out of habit before then!  This is a challenge I have to say as when it comes to resettling him in the night, knowing he is still slightly teething and not 100% on form. Due to this I do not want to leave him to cry much, just grizzle really, and then when I go to settle him, if it takes around 20-30min, or less than an hour and is not distressing, I know it is worth the effort from both of us!  With my ‘baby wrists’, (both have ‘baby wrist now’) this really hurts, as I mostly am using the pick up and put down method, which in combination of a little bottom tap or head stroke, works best for George’s personality but as he is getting more physical and heavier, these wrists of mine are really troublesome.

I wondered in the night, how many other mothers have found much difference in their wrists once they stop breast-feeding?  One physio that I have seen said I should see an improvement and there are times I think to myself that I should stop for the sack of the terrible pain I am having daily, worst of all night and mornings but then a huge part of me thinks that I should just bare it for a bit longer as I am only having one baby! 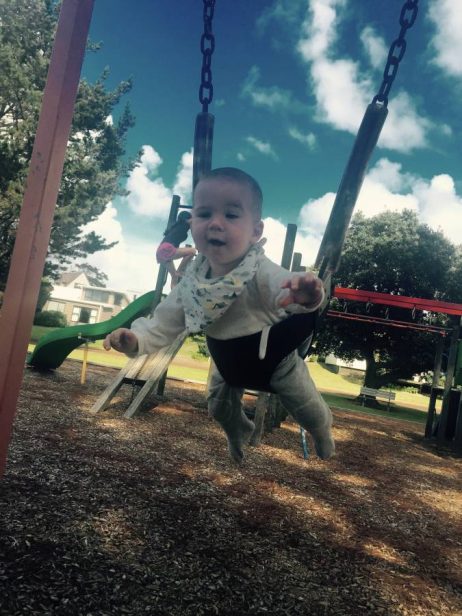 I have had one of those months, it has been challenging, my wrists really painful, more travelling, leaving G for the first time and balancing work expectations and a teething baby, broken sleep again. Also moving out of my own space, or for that matter ‘our’ own space has been much more challenging than I realized.  While we are incredibly lucky to have the option of staying with family, I have been finding it hard, sharing our daily routine and space with others, especially after living alone for over 10 years. I have got use to a lot of quiet time.

So while his personality brings me so much joy and his ability to settle and sleep in any place I take him, the teething and transient life we are living will not be missed when all settles down… for a while! 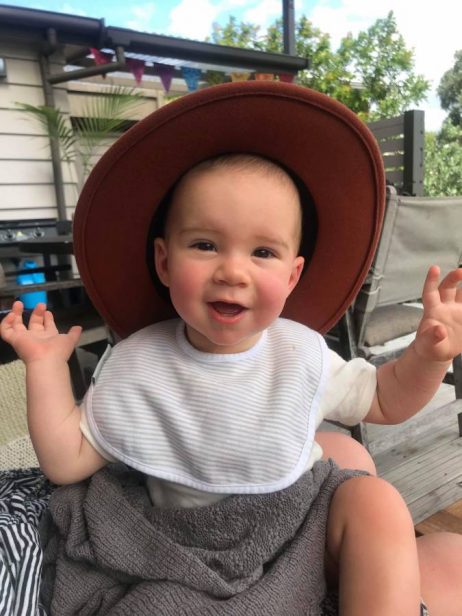 George at 1yr !
Scroll to top